Link for the source code at the end of the tutorial. Step 2. Enter Project Name, to be consistent with the J2ME version, I chose HelloWorld. 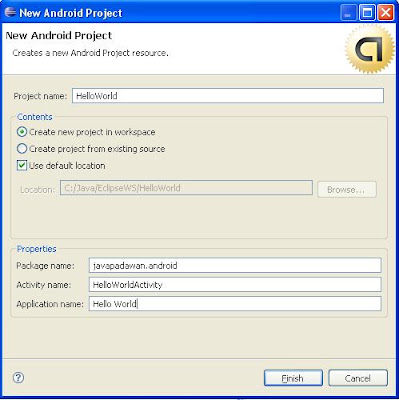 Android enforces a two identifier package, thus javapadawan.android is used.
The Activity name, entered in above will serve as the entry point of the application. This is similar to J2ME's MIDlet. One can create multiple MIDlets, but only once can be used as a program entry point. 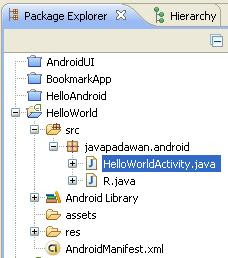 Note that R.java is generated by the Eclipse Android plug-in, so don't bother with that. Also, when encountering compile problems with R.java, just do a Clean on the Eclipse Menu Project>Clean then Build the Project.

When you created the HelloWorldActivity, the Eclipse Android plug-in already created the layout XML. 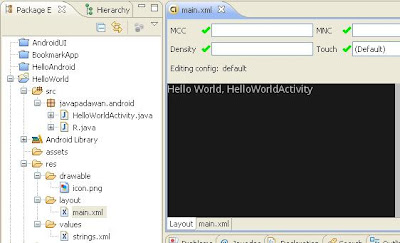 Above is generated XML. Although, one can program Android user-interfaces by hand, without using XML, but that's considered an advanced topic. Similar to coding UIs using MIDP's Canvas. 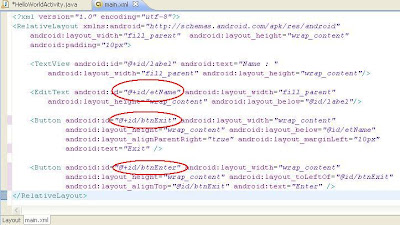 Below is the User Interface similar to the J2ME version of the HelloWorld. The one's encircled in red are going to be used in the HelloWorldActivity class, the @+id/
Posted by java.padawan at 4:12 PM

I wish to point out this article.

It expain the steps(from java code to running into emulator) to make the first hello world without eclipse.
I hope it is welcome!